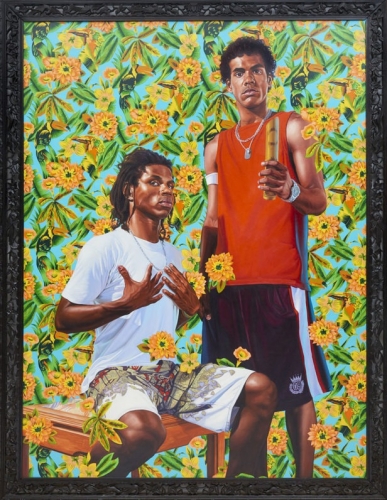 Featuring 90 contemporary artworks by 37 American artists of diverse backgrounds, The World Stage showcases prominent names from the 20th-century art canon alongside today’s global influencers. The exhibition title is borrowed from the name of a series of paintings by Kehinde Wiley, an artist best known for his presidential portrait of Barack Obama, which hangs in the National Portrait Gallery. The selected works comprise a variety of media, from painting to installation, with a special focus on original prints made in a wide range of techniques. The World Stage includes works by some of the most influential American artists from the past 50 years, including Jean-Michel Basquiat, Romare Bearden, Vija Celmins, Willie Cole, Helen Frankenthaler, Joe Feddersen, Mildred Howard, Jeff Koons, Jacob Lawrence, Hung Liu, Wendy Red Star, Robert Rauschenberg, Andy Warhol, and Kehinde Wiley. The artwork in this exhibition has particular relevance to the current conditions of our world, the major cultural shift in our nation prompted by the Black Lives Matter movement, and the roles of museums and collectors in society during times like this. Each artwork represents the individual experience and perspective of its maker to engage with larger global issues.

Organized by the Nevada Museum of Art

Sponsored by Bev and George Harad