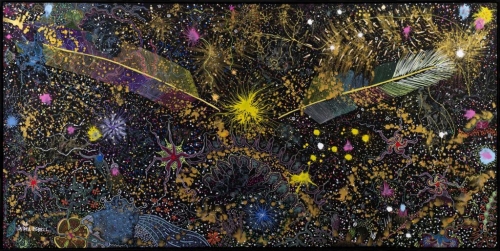 The couple Andrea and José Olympio Pereira have been on the list of the greatest art collectors in the world, made by ArtNews magazine in recent years. Also in recent years, independently, they started to hold biannual exhibitions of the works in their collection, with clippings made by invited curators. The last, made last year at Galpão da Lapa, was curated by Júlia Rebouças

Agora, the collection gets an exhibition at the Banco do Brasil Cultural Center in Rio de Janeiro. The exhibition, with works selected by the curator Raphael Fonseca, presents an overview of the last 40 years of Brazilian art. Under the title "1981/2021: Contemporary Brazilian Art in the Andrea and José Olympio Pereira collection", the exhibition brings together 119 works by 68 artists and will be on display until July 26th.

Barbara Wagner and Benjamin de Burca, As if it were true. PHOTO: Renato Parada

The Andrea and José Olympio Pereira Collection has around 2,500 works and is centered on the production of Brazilian artists from the 1940s onwards. In this exhibition, a selection of works is displayed that seeks to draw attention to the importance of collecting in Brazil. They are works in different languages ​​(painting, installation, sculpture, video and photography), divided into eight exhibition rooms on the first floor of the Rio de Janeiro institution, separated by thematic nuclei. The curator explains that “the idea is for the public to see each room as a different exhibition and to have a different experience in each one. The contrasts and diversity of Brazilian art will be visible from the viewer's experience ”.

Each room is guided by a work present in each of the spaces. The curator explains that these works guide the themes and “create a dialogue around, some of which are more literal and others less so”. In the second room, for example, the sculpture Coluna de Cinzas, by Nuno Ramos, initiates a conversation about “time, death and the brevity of life”. She dialogues with works such as O Peixe (2016), by Jonathas de Andrade, and Isto é a drug (1971/2004), by Paulo Bruscky. In the third room, which includes the largest number of works among the eight, the painting Costela de Adão(2013), by Marina Rheingantz, points to a dip in the landscape theme. This space features works by names such as Amelia Toledo, Ana Prata, Brigida Baltar, Claudia Andujar, Efrain de Almeida, Fabio Morais, Jaider Esbell, Janaina Tschape, Jorge Guinle, Leonilson, Lucas Arruda, Lucia Laguna, Marina Rheingantz, Mauro Restife, Paulo Nazareth, Rodrigo Andrade, Sandra Cinto, Vania Mignone and Waltercio Caldas.

Paulo Bruscky, This is a drug, 1971-2004. PHOTO: Courtesy of the artist and Galeria Nara Roesler

The institution reopened its physical space after a lockdown instituted in the city, adopting several health security measures when making adaptations, such as entry only under online scheduling, control of the number of people in the building at the same time, single flow of circulation, temperature measurement at the entrance and mandatory use of a mask! In addition, the place offers alcohol gel and has signs on the floor to control the distance between visitors.