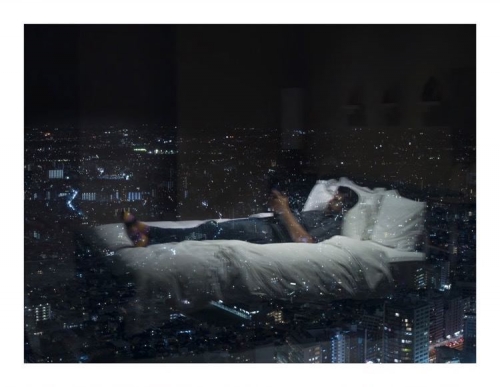 Jeffrey Grove, Director of Museums and Publications, has selected a photograph by Alec Soth for our #StaffPicksSaturday. Celebrated as one of the most important photographers working today, Soth has a keen instinct for finding beauty in subjects others might overlook. Grove writes, “I find Park Hyatt, Tokyo, 2015, to be among Alec’s most poetic images. It is one from a series The New York Times commissioned from him for their travel magazine entitled, The Voyager Issue: Six Photographers on Their Dream Journeys.

Well-known for his insightful, travelogue style of documenting different cultures and societies, for this project Alec took a perhaps deliberately counterintuitive approach. Rather than travel to a destination and seek out its attractions and meet his subjects in their unique environments, Alec journeyed to Tokyo to create his own take on a movie that he greatly admires, Sofia Coppola's 2003 film, Lost in Translation.

In that motion picture, Scarlett Johannson plays a young college graduate who sits bored in her hotel room while her husband, a celebrity photographer, is on assignment. In an amusing twist, Soth—himself now a celebrated, if not celebrity, photographer—chose not to leave his room for the entirety of his stay. Instead, he brought the city to him, inviting performers, singers, and a sushi chef, among others, to visit him in his room, where he then photographed them. Among the many striking images in this series, are a number of compelling self-portraits, a rare subject for the photographer.

This poignant image shows Alec lounging barefoot in his hotel bed, photographing his reflection in the window. Appearing almost as if it were a double exposure, in it the artist seems to float magically across the nocturnal cityscape. At once melancholy and deeply personal, it speaks to the sense of isolation and “outsider-ness” that Soth has frequently captured in his photographs of others, but also foreshadows a tenderness and sense of vulnerability that would be declared even more forcefully in subsequent bodies of work, such as I Know How Furiously Your Heart Is Beating.”