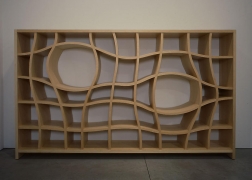 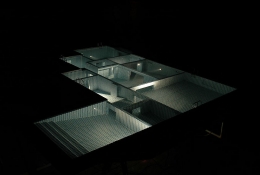 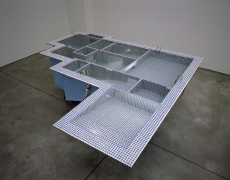 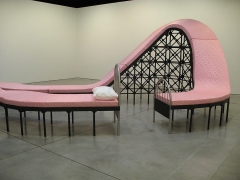 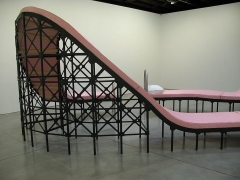 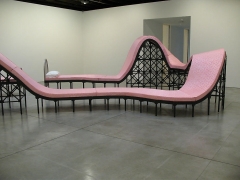 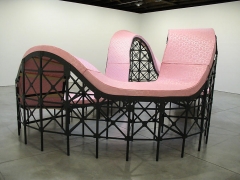 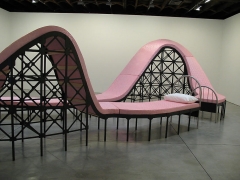 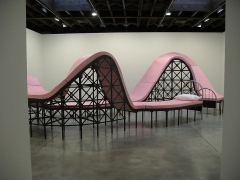 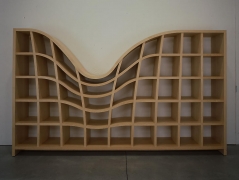 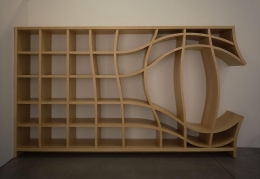 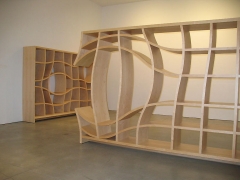 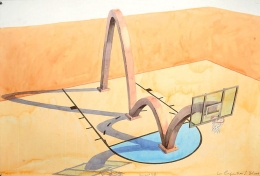 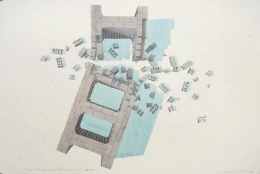 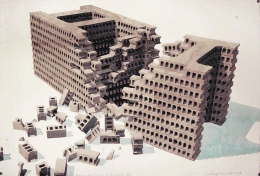 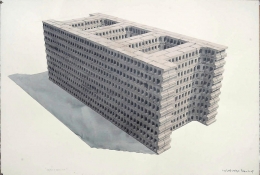 Sean Kelly Gallery is delighted to announce a major exhibition of new work by Los Carpinteros, their first since joining the gallery. Los Carpinteros is a collaborative comprised of two artists, Marco Castillo and Dagoberto Rodriguez, based in Havana, Cuba. The opening will take place on Friday, March 21st from 6pm until 8pm.

The exhibition, La Montaña Rusa, consists of a new work of the same name, which alludes to both a roller coaster and a bed, juxtaposed with other new sculptures and a group of drawings. The exhibition investigates Los Carpinteros' interest in objects of domesticity, as exemplified by items such as beds, swimming pools and shelves.

La Montaña Rusa, which occupies the main gallery, demonstrates the artisanal aesthetic of Los Carpinteros' oeuvre, at the same time as it domesticates a large-scale public form of outdoor entertainment. The work's title literally translates to "Russian mountain" in English, but it is commonly known as the Spanish term for roller-coaster. This double entendre is consistent with much of the work of Los Carpinteros. La Montaña Rusa clearly alludes to the cycles of life, rest, dreaming, sexuality, birth and death. The alteration of scale inherent in La Montaña Rusa is repeated in Home Pool, a fiberglass, steel and water-filled hybrid which conflates the structures of an outdoor pool and the architectural footprint of a home. Estanterias, three 750 lb sculpture/bookcases blur the boundaries between utilitarian objects and architecture. The alteration and exaggeration of the bookcases defies the purely functional aspect of a piece of furniture habitually used in most homes.

Several works on paper which accompany the main exhibition in a private viewing space illuminate the indispensable role that drawing plays in Los Carpinteros' body of three-dimensional works. As Los Carpinteros have stated: "In order to be able to converse, we need a drawing in front of us. At times a verbal dialogue is not sufficient. But this does not mean that each and every drawing ends up as a piece of sculpture…the drawings, in a sense, are the letters we write each other."

Firmly posited in the realm of the domestic, these new works by Los Carpinteros explore the mutable territory between the pragmatic and the imaginary. The highly intimate human refuge of the home is evocatively juxtaposed with the realm of public space, informed by such subjects as a roller coaster or a swimming pool.

Los Carpinteros are without question the most significant artists to have emerged from Cuba in the last decade. Their work is in the collections of the Solomon R. Guggenheim Museum, New York; The Museum of Modern Art, The New York; The Los Angeles County Museum of Art, Los Angeles; The Museum of Contemporary Art, Los Angeles and The Tate Modern, London, among many others. Forthcoming exhibitions include a new commission for a group exhibition at the Hayward Gallery in London and a new site-specific installation for the Indianapolis Museum of Art.