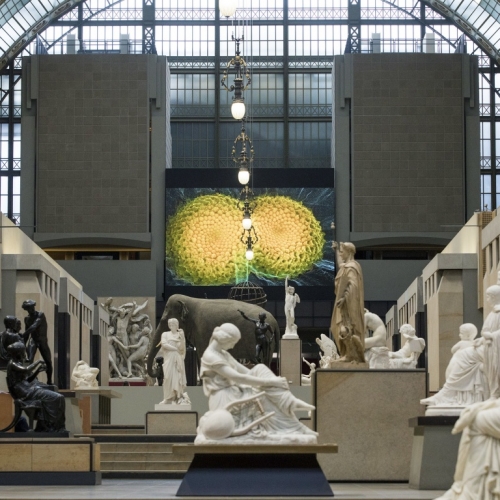 Laurent Grasso was invited in 2017 by the Musée d'Orsay to produce a large-scale work in dialogue with the exhibition event The Origins of the World. The Invention of Nature in the Century of Darwin.

For three years, the Laurent Grasso studio has been undertaking research into man’s irremediable transformation of the natural world, and how nature and culture are becoming inseparably intertwined. A film and a series of paintings and sculptures are now being developed.

In line with Darwinian research, the artist examines the developments, mutations and transformations of living things but in the context of a hyper-acceleration of these changes and a paroxystic hybridisation of humans and non-humans.

Taking the Darwinian topos of the expedition, Laurent Grasso’s proposed film poses the question of exploring a world mapped out by satellite, a hyper-connected world, where space and time are compressed, and in which discoveries are linked more to a conceptual, prospective and experimental geography than to a physical journey such as that undertaken by Darwin on HMS Beagle.

This was how the idea of a "machine film" gradually developed - a film that would be written, developed and reassembled like a code, drawing on the world as it might on a database, and bringing out the spectres of various places that reveal the impact of man and his engineering on environments.

Rather than choosing an actual shoot as in its previous films, the Laurent Grasso studio has undertaken an extensive process of treating images, facts and narratives that have already been collected with the feeling that the issue of exploration today is to be found more in the challenges of analysing big data than in accumulating new data to interpret. In other words, the opacity of the world is more likely to result from an accumulation of information to decipher than from geographically unknown areas to be cleared.

The arrival of the COVID 19 crisis has tragically corroborated the insights that developed as the project advanced. On the one hand this is because it is a "hyperobject" whose invisibility is superseded only by its global reach - a complex product resulting from hazardous interactions between humans and non-humans and a globalised geography - on the other hand, because the confinement it imposes emphasis the growing importance of this virtualisation of the world.

In conjunction with the exhibition The Origins of the World. The Invention of Nature in the 19th Century, the French artist Laurent Grasso was invited by the Musée d'Orsay to produce a large-scale work: Artificialis.

This new film, projected on a huge LED screen at the end of the museum’s nave, examines the notion of exploration through new tools that are able to reveal an invisible world, which we are, as yet, unable to access.

It reveals an ambiguous, fast changing, spectral territory where reality and virtuality are superimposed on each other, and where our points of reference vanish completely.

In the artist’s studio in Paris, we see the various stages in the creation of his work through his research, his conversations with Grégory Quenet, professor of the history of the environment, and his work sessions with Warren Ellis on creating the original music for the film.

Laurence des Cars, President of the Musée d'Orsay, will explain the challenges of her invitation to Laurent Grasso.