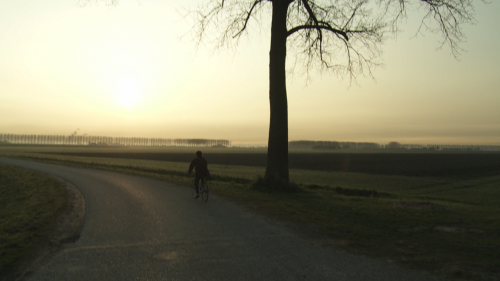 This #FilmFridays feature is David Claerbout’s film Sunrise, 2009. Click the link below to watch on Vimeo for 24 hours from Friday, July 10 until Saturday, July 11.

Join us on social media and tag @SeanKellyNY to share a pic of your at-home screening.

In his films, David Claerbout often manipulates moving and still imagery to suggest an otherworldly level of existence, something that might refer to a specific place or event, but whose timeline is not clear. Sound is a critical element in many of his works, often used as a narrative device, or a “guide” for the viewer to navigate the space of the film.

Claerbout’s Sunrise depicts the early hours of the morning when it is still dark outside, as a housekeeper begins her day. She arrives, changes into her uniform, and readies the house for a new day. When she has finished with her tasks, she leaves the still quiet house, where the owners have still not risen, closes the door and leaves on her bicycle, as quietly as she arrived. As she rides into early morning sunlight, Rachmaninov's emotional composition Vocalise is heard.

Although the first part of the film is set in darkness, it is possible to distinguish the contours of human action in contrast to the geometry of minimalist architecture. The camera uses the architecture's functionalism to 'imprison' the choreography of the maid's movements between surfaces and lines, a dominant trope throughout the first part of the film. The house, reminiscent of Mies Van der Rohe’s and Philip Johnson’s architecture, remains enveloped in darkness until the end of the film, portrayed as if it were a fragile museum piece that cannot withstand the bright light of a modern future. Sunrise elicits conflicting feelings about 'the end' of the film: although shot as a classical ending sequence, it somehow feels like a beginning.