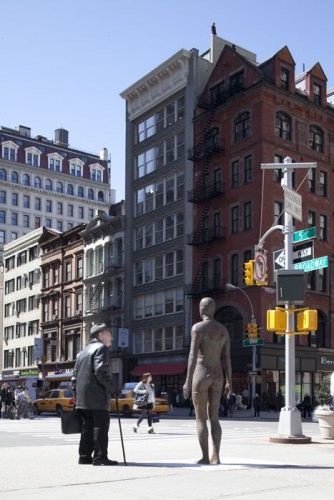 For today’s #IntheArchive we revisit the ten-year anniversary of Event Horizon, Antony Gormley’s first major public art project in the United States, which was installed in New York City from March 26 – August 15, 2010.

This landmark art exhibition featured 31 life-size body forms, cast in iron and fiberglass, inhabiting the pathways and sidewalks of historic Madison Square Park, as well as the rooftops of prominent architectural sites throughout New York's Flatiron District. A complex intervention into the urban fabric, Event Horizon was a form of acupuncture of the city: an invitation to think about intimacy and distance, drawing attention to the topography of the city as a landscape. The four sculptures at ground level came face to face with pedestrians going about their daily lives in and around Madison Square Park, the epicenter of the project. The remaining 27 works were installed along the parapets and rooftops of buildings that surround the park—some as high as 55 stories— including infamous New York City landmarks such as the Empire State Building, the Flatiron Building, and the New York Life Building.

Speaking about the project at the time, Antony Gormley stated, “I’m thrilled to be working with New York: with people and place. I don’t know what is going to happen, what the work will look and feel like, but I want to play with the city and people’s perceptions. My intention is to get the sculptures as close to the edge of the buildings as possible. The field of the installation should have no defining boundary. The gaze is the principle dynamic of the work: the idea of looking and finding, or looking and seeking, and in the process, inviting you to re-assess your own position in the world. So, in encountering these peripheral bodies, perhaps one becomes aware of one’s status of embedment in the city.”